Rusty was released to come home after spending one night at the vet. I was so happy to have him home and have been amazed at his progress. When I first saw him right after surgery at 4:30pm he was very drugged. I called the techs a few times overnight to see how he was doing. They checked his vitals every two hours and he was a little chilly so he got some heat support but otherwise his numbers were good. They tried to take him out to potty at 9pm and he didn’t like the sling and had trouble trying to stand. They fed him at 2am and 8am and he ate well (food is Rusty’s favorite thing). They took him outside every 5 hours and because he didn’t like the sling they let him try it on his own and he was able to figure out how to squat! The surgeon called at 9am and said that he was doing well and would be able to come home later that same day.

I went to pick him up and met with a tech who answered all of my questions ( I had loads of them and she was very patient and thorough). I got the bill, made a  follow-up appt. and collected his medicines and then she brought out my little guy (or little “flower” as he looked in his cone). This was the first time I had seen his incision site and honestly, it didn’t bother me at all. I thought he looked beautiful.

Before I left, they showed me how he was walking and I couldn’t believe that he could stand let alone take some steps. I was so impressed with how well he was doing on his first night home. Rusty ate his dinner, took his meds and peed and pooped outside! The first night he was very restless and couldn’t seem to get comfortable. The next day he was able to nap soundly and was walking better every time he got up. I had gotten him an inflatable collar to wear instead of the cone but he can still reach his incision to lick so he has the cone back on today. 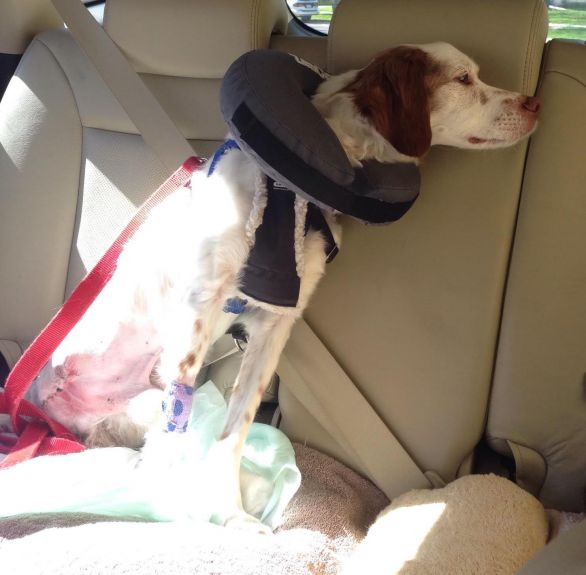 Rusty has adjusted so quickly to having three legs and has such a good attitude. I decided I had absolutely no excuse for not doing the same! I am so proud of him and inspired by him and so glad to have him home. 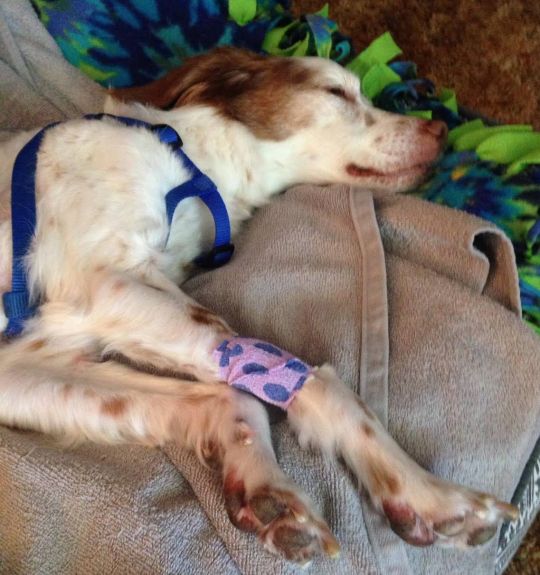 We should get the findings from the pathologist next week and we have gone ahead and scheduled an appointment with the University’s oncology department in case we need to pursue chemo. I am doing my best just to take each day as it comes – just like Mister Rusty Bucket. 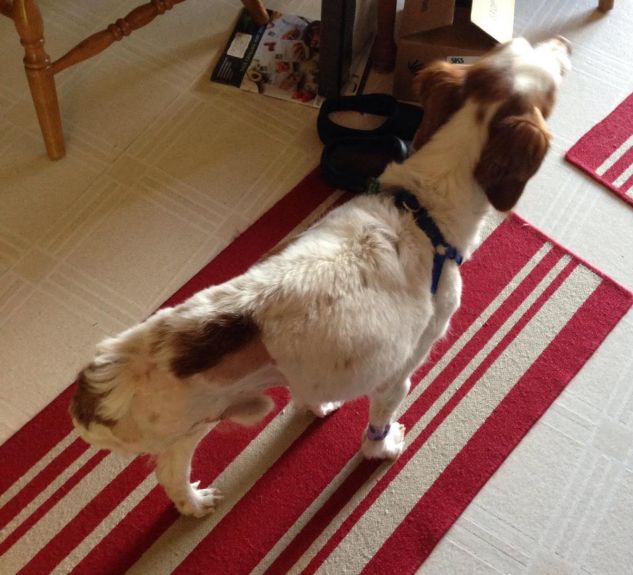 Standing on his own!

Thank you to everyone who has taken the time to read my ramblings and send well wishes for Rusty. It is helping me so much to have the support of others who have been through this same thing.

Rusty is officially a Tripawd!

Thank you to everyone for your words of encouragement. I can’t believe I found this website and this amazing group of people who are so kind and supportive.

Rusty had his surgery today at 2:15 and it took about an hour and a half. Dr. Jackson came out and told us that the surgery had gone well and that everything looked good and that we could see Rusty. They brought him into an exam room wrapped in a fuzzy blanket and his little eyes were open so wide. He was of course on loads of drugs and he couldn’t even figure out how to retract his tongue – but there he was, my sweet boy and he was beautiful and precious and awake. I was so happy! 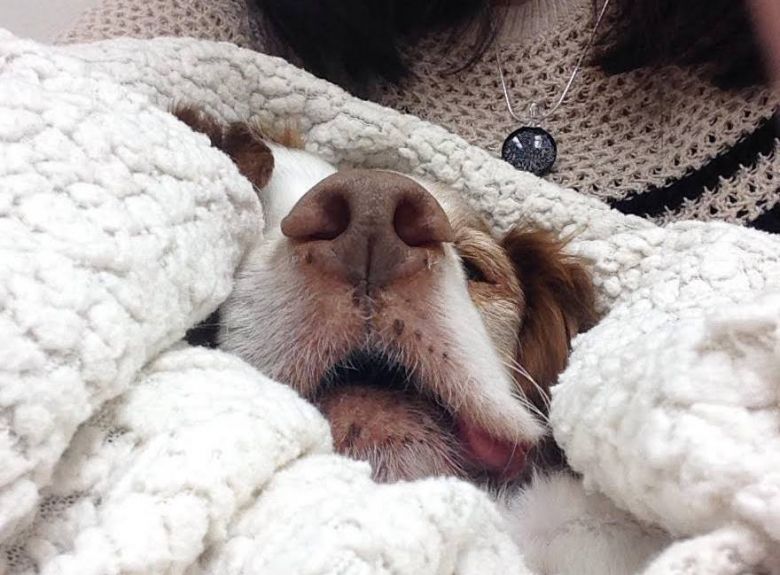 I haven’t seen his incision site yet but I think that’s ok for today. I was just so relieved to see that he was doing well and was so happy to hold him (he did feel lighter). He is staying the night so they can monitor his progress. They will try to feed him at 2am and will try to take him out to potty. I will try not to call every hour!

I am so thankful that his surgery went well. Step One – Done. I can almost breathe again. 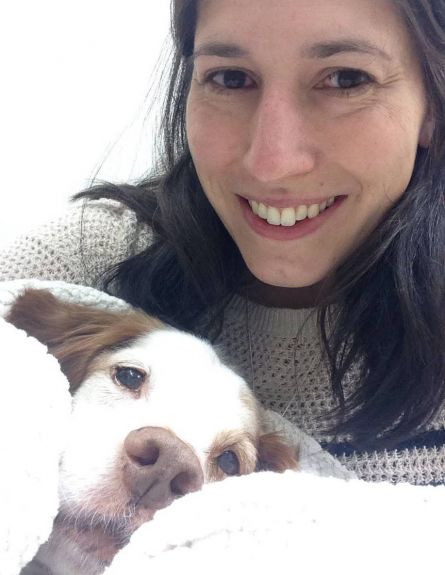 Me and my brave little guy

Tomorrow morning we are scheduled for surgery. We have to report at 8:45 but aren’t sure of the exact surgery time. I have packed our bags as we are traveling out of town and will need to spend at least one night away. Rusty got a bath today ahead of his big day tomorrow and we spent some time outside in the yard as it was just beautiful outside and the tulips are blooming and more importantly for Rusty – there were lots of robins and rabbits to watch. 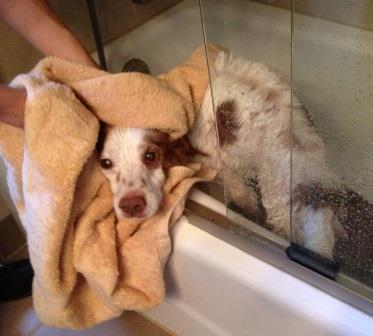 I am nervous but I know that Rusty will be in good hands and that this surgery will help him feel better and live longer. Now I better get some sleep – mostly because I have to get up and face a Brittany who lives for food and can’t have breakfast in the morning! I haven’t told him that part yet…

The Not Knowing – Ultimate Torture or Ignorant Bliss

Last Monday at 9:15am our world stopped turning. We had taken Rusty a/k/a Mister Rusty Bucket in to a local vet for a third visit concerning what had presented as a partial ACL tear. If only. Instead within moments of examining his swollen right rear knee the vet determined that this was in fact not an ACL issue but likely bone cancer. We had lost his sister, an Australian Kelpie, to hemangiosarcoma eight months ago and never imagined that we would be here again. Rusty is a small Brittany weighing only 20 pounds and is not a usual candidate for bone cancer, but his sister, Lucy, hadn’t fallen into the usual group to be diagnosed with hemangio so we are starting to put less faith into the typical cancer candidates. After x-rays and blood work up the vet recommended amputation – the next morning. Instead we decided to visit a specialist for additional x-rays, abdominal ultrasound and a blood aspirate/cytology. We made an appointment for Wednesday morning and learned that mercifully Rusty’s x-rays and ultrasound looked clear and aside from an elevated ALB and low white blood count his blood work looked good as well. Then we waited. And waited. And waited. I began searching online for information for osteosarcoma and amputations and found tripawds.com. I found great relief in reading others stories about successful amputations and hearing that others were scared and worried and unsure of their decisions. 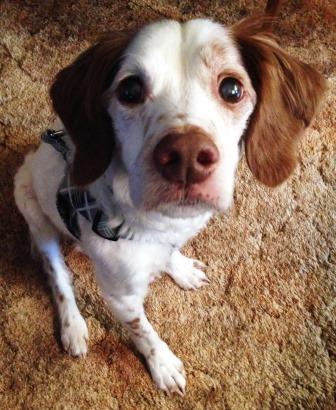 The specialist said he would call with the cytology results today and I spent the day glued to the phone willing it to ring and to be silent at the same time. I wanted to know what they had found but didn’t want it to be said aloud and become real. Every time my phone made a noise I felt compelled to check. Finally at 2pm I received the dreaded/awaited call. The cytology results showed that the findings are consistent with chondrosarcoma but that osteosarcoma cannot be ruled out. The treatment for both begins the same – amputation. I thought by spending hours over the last week on tripawds I had resigned myself to this treatment plan but it still seems shocking and drastic and scary and final. I thought I had no problem with the idea of a three-legged dog, if he won’t care why should I? But I do. It’s his leg and his little precious red spots and his little foot that smells like popcorn. Oh and I forgot to mention this is his “good” back leg. He had FHO surgery on his left hind leg when he was a wee little bugger (I adopted Rusty after he had been hit by a car and had his pelvis shattered – the vet techs nicknamed him Mister Rusty Bucket)

The current plan is to have Rusty’s right rear leg amputated on Friday. I want the cancer and the source of pain removed but the nitty gritty of the amputation makes me very nervous. I am worried about how Rusty will react and how I will react. He is the baby and the smallest of the family and my last living dog and it breaks my heart for anything to happen to him.

I am going to set about reading the positive stories on this site and take some video of my little guy twirling on four legs and snuggle him up close but right now I have to get him his dinner because he is really giving me a piece of his mind about this whole typing on the computer past dinner time thing….